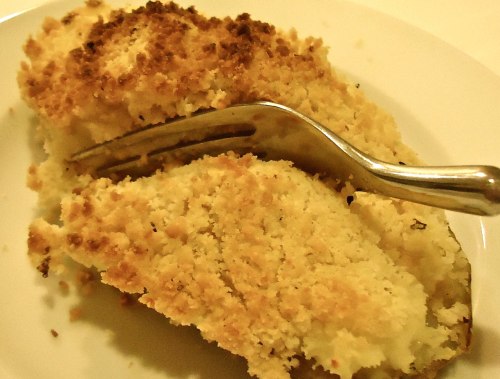 Back to the real world now after almost a week away and I am still thinking about all the wonderful restaurants I encountered while in Ohio. I have a newfound appreciation for the Cleveland area and it’s bounty of dining delights – any foodie should be very happy to visit that town, especially during the summer. I’ll get more in depth on the trip later, specifically the West Side Market. Coming from my town where one must exert a good bit of time to finding ingredients like fresh butchered meats, game and/or unusual spices it is a treat to literally shop under one roof for it all.

My recipe today may be one that you’re familiar with or if you’re over about age 40, enjoyed at a “fine dining’ restaurant many years ago. In my family it is known as “THE” twice-baked potato and is one of my go-to side dishes for steak or lamb chops. I created this specifically as a tribute to my favorite restaurant from childhood, The Elite Epicurean, located in Columbia, SC (my hometown).

The Elite Epicurean opened in 1932 and it’s location on the corner of Main and Laurel Streets meant that it was across from the Federal Courthouse and City Hall. When it closed in 1997 many a ‘politico’ and/or local mover and shaker-type had enjoyed it’s European/Mediterranean fare. My Dad’s office was downtown and he often lunched there, I guess, as a member of the ‘traffic club’ – a professional organization for those in transportation industries.

I remember dining at the Elite Epicurean on special occasions, like birthdays and my high school graduation. It was like a fancy diner with a long bar, wooden tables (white table clothes too) and big overstuffed booths along one wall. But here the food was the thing. They had what, in those days, would be considered a huge menu with lots of variety. Their lunch menu was sizeable, famous for sandwiches with curious names like “The City Hall,” with a tongue and cheek description reading something like, “conservatively roasted with a liberal dose of mayonnaise.” And “The IBM,” “logically stacked with onions and programmed to your specifications.”

The dinner menu had for that time “epicurean” level entrees like lamb chops, veal, shrimp cooked in a wine sauce as well as an actual “amuse buche” served along with your meal… fancy-smancy for Columbia, SC in the 1970’s and 80’s. Of course, I always ordered the most exotic thing I could find on the menu, like the lamb or grilled calamari, while everyone else opted for something more conventional. The one thing we would all agree on, however, was the masterpiece known as the Epicurean potato.

This twice-baked potato was the best…ever. It was crispy on the outside – because it was fried, yes, fried! But the inside was light, fluffy and rich. I do not know exactly what was mixed into those potatoes but it was nothing short of spud perfection.

Apparently the restaurant closed one day in ’97 without any prior notice but after being a business in decline for years. I’m sure oblivious patrons would have rallied to the cause if they had known; it was a sad day. In years since, I came up with my own recipe, and although it is not fried, it packs on the calorie count with the butter, cheese and light cream. It’s a make-ahead side dish – add some chopped ham, sauteed minced veggies or fresh-made sausage and it could be a meal in itself too.

To me it’s claim to fame is reminding me of fun times with my family, particularly my father, and interestingly enough it was the side dish served to my now-husband at the first meal I ever prepared for him. I always thought (he says) it was the accompanying rack of lamb that propelled him to fall for me but now that I think about it, maybe it was “THE” twice-baked potato all along…

Clean potatoes are wrapped in foil – just like a regular baked potato. 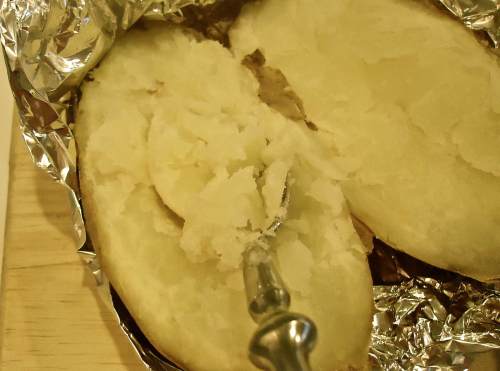 After baking, allow the potatoes to cool a little so you can handle them. Slice the potatoes in half so that the two pieces will be able lay flat in the baking dish. Russet potatoes work best. Carefully scoop out the cooked potato.

The cooked potato goes into a bowl or container. Mash with a large spoon or potato masher.

Here are the potato jackets, sprinkled with a touch of salt and pepper and ready to be filled.

After adding in softened butter pour in the half and half. Mix in the sour cream and salt and pepper. 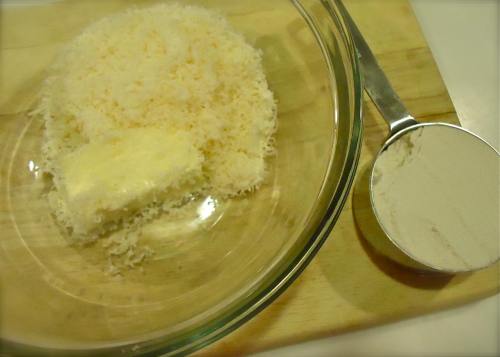 Three ingredients for the topping: butter, cheese and flour.

The topping is crumbly but moist. 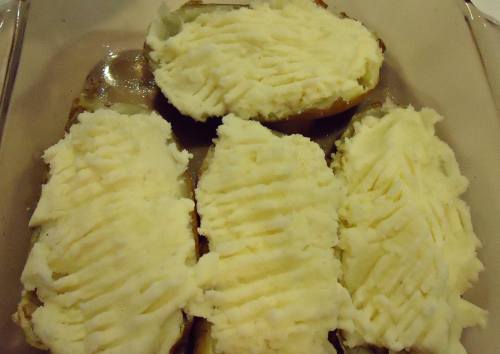 Fill the jackets with the potato mixture and then…

Carefully spoon on the topping. Bake in a preheated 400 degree oven – or hold in the refrigerator until 20-25 minutes before serving time, then bake.

Preheat oven to 500 degrees. Wash (scrub if necessary) and dry the potatoes. Wrap each potato in foil and place in the oven. Bake for 1 hour or until cooked through. Remove from oven and allow to cool slightly. Reduce oven temp to 400 degrees.

In a medium bowl mix 4 tablespoons butter, cheese and flour. Stir to combine to make a crumbly mixture. Set aside.

Slice potatoes in half so that each half will sit on its flat side. Carefully scoop out each potato and place the cooked potato “insides” into a medium bowl. Mash the insides with a potato masher or a mixer or a large, flat spoon. Add the remaining 2 tablespoons butter, the half and half and the sour cream to make the filling. Season with the ½ tsp salt and ½ tsp pepper.

Place the potato skin ‘jackets’ in a buttered baking dish. Sprinkle the inside of each jacket with a little salt and pepper. Spoon the filling into the jackets. Top each potato half with the cheese/butter crumble mixture*. At this point you can cover potatoes and hold up to a day in the refrigerator if you like.

Place potatoes back in the preheated oven and bake 20-25 minutes until filling is hot and the tops are browned. Serve immediately. Makes 4 servings and can be easily doubled.

39 thoughts on ““THE” twice baked potato for the ‘epicurean’ in all of us.”