Okra is one of my favorite foods. Yes, I love it fried but also in gumbos, stewed with tomatoes, pickled, and even slow cooked alone for what my mother and I refer to as “slimey okra”. Has a nice ring to it, doesn’t it? When the fresh okra started coming in heavy in our garden, my Mama would prepare a small pot of slimey okra just for her and I to share. It is basically just plain okra slow cooked whole in slightly salted water. The okra releases it’s “goo” (called mucilage) and the entire okra was well, in a word, ‘slimey’. Since none of my other family members would come within 6 feet of it, the slimey okra was all ours. Yum.

If you like gumbo you know it’s this same goo that makes a traditional gumbo thick but if you cook it with tomatoes some of the sliminess is reduced (due to the acidity of the tomatoes). During my childhood, we ate many dinners of stewed okra and tomatoes – seasoned with a little bacon, salt and pepper and usually served over rice. This is very much a South Carolina dish and we ate it often during the summer months when the main ingredients were literally over flowing from our backyard garden. It made a light but filling summer supper during those hot months.

In my okra research, I recently found out that okra can also be described as a health food since it’s high in fiber, vitamin C, and folate content and contains antioxidants too. The seeds of edible okra also produce oil that is high in unsaturated fats and apparently tastes and smell pleasant, although I’ve never found okra oil for sale. I’ll have research this more. Okra seed oil is also suitable as a biofuel. Okra of different varieties is grown and eaten throughout the world – from Malaysia to Nigeria to Vietnam to the Caribbean.

Of course, here in the South we love our okra. I do believe it is a very under-rated vegetable – obviously it’s good for you and can be prepared in many ways – surely one to suit most any taste. Now frying okra is probably the least healthy but very tasty. My “died-in-the-wool non-southern food eating” husband now loves fried okra. Yes, he told me didn’t like “southern food” when we first met and yes, I married him anyway. I feel one of my goals in life is to undo the wrongs of bad food – so I’ve been converting him slowly over the past 7 years. But that’s a story for another post – or two.

Fried okra is a treat in our house and I prepare it for special occasions and/or when the first local okra comes into harvest, which is about right now. It so happens that I was testing a mustard roasted pork loin recipe when I made some fried okra so I paired them with creamy stone-ground grits. It was a wonderful combination of flavors and texture. I’ll be posting the recipes and images for the entire meal soon but I’ve included one picture now, just to whet your appetite! 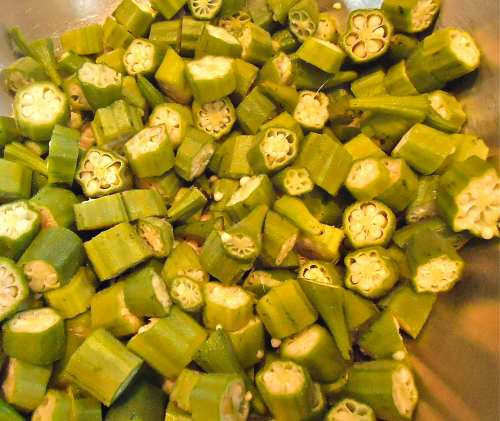 Cut the washed okra into slices about a half inch in size – but smaller is okay too.

I use a little grape oil to coat the okra; it allows the cornmeal to stick better. 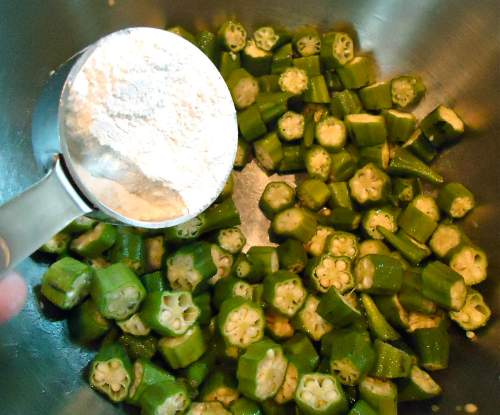 Sprinkle the okra with salt, pepper and the cornmeal. 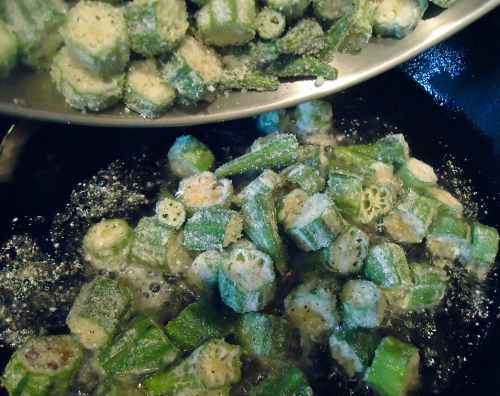 Add the cornmeal coated okra to the hot oil. My cast iron skillet is perfect for frying up a pound or so of okra. Too much okra in a small pan would not cook as evenly. 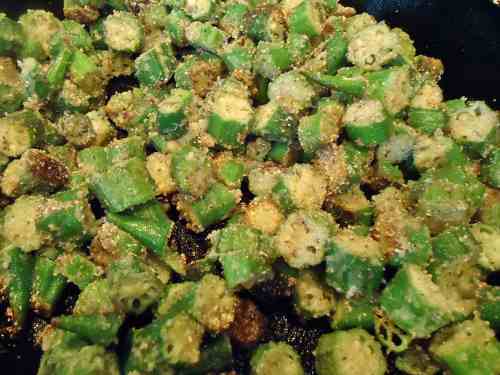 The okra is getting browned. Try to avoid stirring and flipping the okra too much. Having a seasoned skillet and a familiar stove top makes this easier. 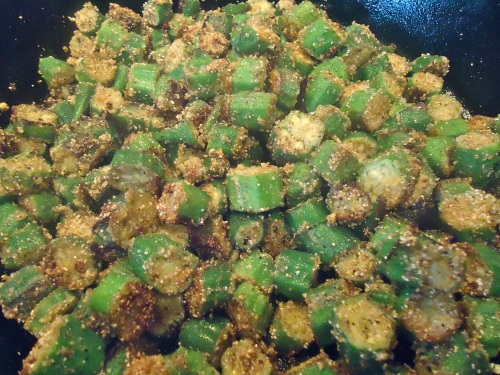 Here you can see the okra at about 10 minutes into the frying process – won’t be long now!

The okra is ready…crunchy with a great fresh flavor. Remove to a paper towel lined platter so the excess oil can drain off. Fried okra is best eaten asap! 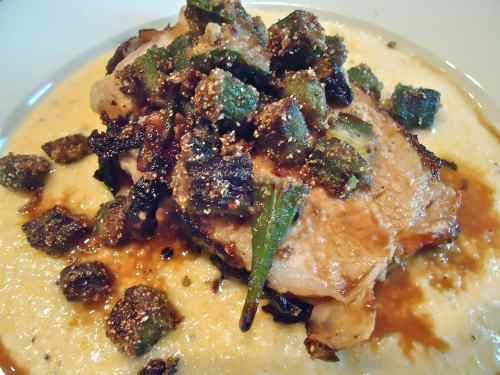 Heat a heavy skillet (I use a seasoned cast iron skillet) and add ¼ cup plus 1 tbl. good quality vegetable oil (I use a canola blend). Heat until very hot, but not smoking. Lower the heat slightly and add the okra all at once. It may splatter, so be careful. Allow to ‘fry” for a full minute or so before turning the mixture over. Adjust temp as necessary so okra cooks at a medium high temp but does not burn. Try not to smash the okra too much and stir only as necessary to allow even cooking. Total cooking time should be 15-20 minutes depending on the size of your pan.

Remove okra to a paper towel lined plate to drain excess oil, season with more sat and pepper to taste if necessary, and serve immediately.

* Grape oil has a higher burn temp than most other oils such as olive oil, so I use it when I know I will be cooking in high heat.