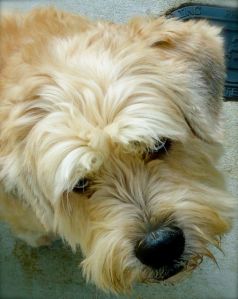 For over a year now I have been trying (eh… sort of) to get this project called “South by Southeast” started. I’ve told friends and family all about my big plans for a digital ride across the Southern food and culture landscape through the eyes of a native, albeit not a redneck hick, i.e.…. me.

I have tested recipes, taken pictures, designed header artwork, made numerous outlines, and done a lot of thinking. But for some reason, that apparently only a procrastinator would love, I just could not ‘start’. I thought about all the reasons why I could not ‘start’. The biggest hurdle being, what do I write in my first post? It must be creative, it must clever, and it must be perfect.

Then I took my dog Jackson out for a walk. It started as just a regular walk in our neighborhood. We walked down to get the mail, avoiding the shrubbery in front of the antique shop where all lifted doggie legs are met with a furrowed brow of disdain from the owner. We got the mail and quickly made it up through the main drag pee-free, only stopping after we reached the green clover under the biggest oak tree. The ground is a little soft and cool here under the shade of all that swaying Spanish moss. Clearly this is a popular spot and Jackson makes a beeline for it every time we are within leash length.

Usually he sniffs (Jackson sniffs a lot) and that’s it. But today, he plopped down and rolled over onto his back, paws up, gyrating in a sort of snow angel motion. I guess it was a clover angel. He did this once, snorted with happiness, got up and started walking. I thought, “Oh what has he just rolled in!” Then I did my own sniff. I perused the clover angel making area and discovered nothing discernibly smelly or otherwise.

Jackson then ambled on ahead to the next clover patch, plopped down and did his clover angel move again. I checked for any putridity and nothing. As we walked ahead to the big open, sunny area in front of our home, the breeze picked up some and I then I did smell something good, something sweet. Honeysuckle? No, maybe it was Carolina jessamine, I thought. Love that smell.

Jackson plopped down again and did his clover angel routine. But this time when he stopped he took a moment to just lay there sprawled out, staring up at the blue sky. Then he looked over at me with his (literally) puppy-dog eyes and scruffy face, all fluffed up from his angel making. He gave me, what can only be described as an exasperated and prolonged look, as if to say, “What are you waiting for woman, roll around in the clover. Life doesn’t get much better than this!”

No, I did not roll in the grass, but I did sit and give Jackson a tummy rub and breathed in that spring air for a bit. I watched some tiny ants scurry to and fro with a blade of grass for a bit, oblivious to everything around them. Then we both got up and headed back to the house where I sat down and started writing this post.

There is nothing to wait for. Today is as good as any day to ‘start’.