Zinnias and such… in the Southern garden.

My hands have been dirty for much of my life. We called it “working in the yard” when I was growing up and now that I am an older married lady I suppose I should be calling it “gardening”. Need to be proper and all.

Behind my parents house we had a nice-sized vegetable garden and us kids spent many hours working (playing?) out there. Even in winter my brother and I dug for buried ‘treasure’, usually getting our clothes filthy and occasionally ending up with a prized find of an old Coke bottle or an unusually colored rock. I can even now give a fairly accurate rain prediction because of playing in that garden, but that’s a story for another post…

Since we lived out in the sticks (and there was no internet and only 4 – yes only 4! television channels) entertainment for the most part hinged on our own creativity and imagination. Well that, and a colorful cast of characters including my extended family, my parent’s friends and our neighbors. There was always something to do. The choice was either inside and that usually involved real chores or outside – also chore-related albeit a little more loosely defined. Most outside chores could be easily changed up, especially if my Dad was involved… and voilà, fun!

I spy with my little eye – squash blossoms! Need some of those to stuff with cheese – so delish. Not exactly Southern, but Southern Italian, at least.

This included that garden. Although my mom and dad considered it serious business (we ate, preserved or gave away all the produce we grew) mostly it was a pleasure to work the garden. My mother got her Park’s Seed catalog back in January and spent hours pouring over the choices and discussing the mail order with my dad. If we had been behaving they would even allow us to each pick out a packet of something they deemed worthy and feasible to grow in the number 8 USDA hardiness zone. Alas, my usual pick of English lavender never made the cut so I chose some unusual-shaped squash or exotic melon. 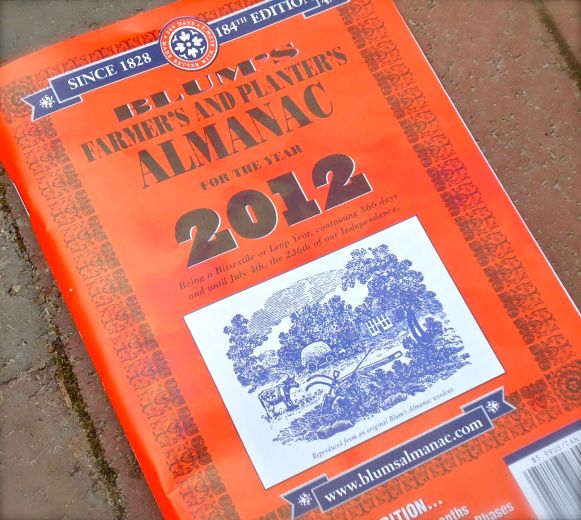 The Farmer’s Almanac, filled with lots of useful information on many subjects including “A Brief Look at Pruning”, spring and fall frost dates, a “scientifically compiled” fisherman’s calendar and monthly planting tables.

That garden was magical and wondrous. In just one week, after consulting the Farmer’s Almanac and the local weather forecast, my parents would have the whole garden either planted or in the least, partially planted and totally prepared for any last minute change-ups. After all, my Uncle Gene or Mom’s cousin George may drop off some tomato plants or excess seeds of some kind or another. Expect the unexpected at spring planting time.

When I was young, I loved feeling how cool and good the dirt was in my hands, even though the air was warm, even hot on my face. Now I think about that sensation whenever I need to relax. Funny how things like that, which happened so long ago can stay ever-fresh in one’s mind, but I can forget exactly where I left my smart phone within 2 seconds. Shrug.

The sense of accomplishment in planning, growing, tending and harvesting the garden is also a great feeling and one I long to pass on to my own daughter. I can write all day long about my own experiences but unless she participates it means zilch to her. 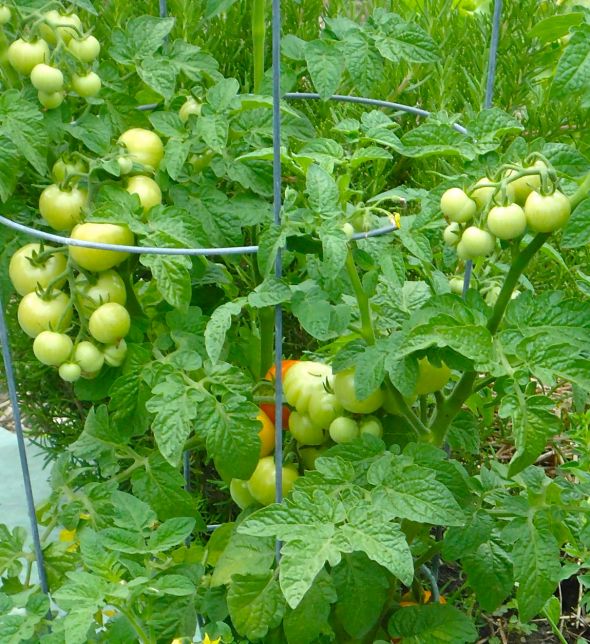 Bush tomatoes – hope ours do this well!

At the moment we reside in a beautiful little spot in the Lowcountry of South Carolina and while I tell everyone within earshot that “we’re never moving!” our current abode is a townhouse with no true yard (but a nice patio). True, we’re never leaving this diminutive ‘burg but I do hope for my own garden space, someday.

My daughter, and this fills my heart with pride, is a scrappy ‘lil gardener who would mulch a whole one acre plot with her child-sized garden tools if we let her. So this year, we’ve “done the best we can with what we’ve got” and created a tiny potted garden area with some bush-type tomatoes, sweet banana peppers and a variety of herbs out back. We’ve even got some zinnia seeds ready to sow in old paper egg cartons.

…and in the beginning there was…this. A humble container garden this year.

And the news on the street is that that there is a “super moon’ this weekend. According to the trusty farmer’s almanac this makes May 3rd-7th a great time to plant, entertain friends AND dig holes. How about a garden planting party? Sounds like my kind of fun.