Fall is an awesome time of the year to be in Bluffton, South Carolina! Not only is it the season for oyster roasts and all manner of outdoor activities, when the calendar rolls over to November then it’s time to gear up for Music to Your Mouth (MTYM) at Palmetto Bluff. Attending the Culinary Festival during this week-long event is an honest-to-goodness gift of the highest order, if you are, like me, a foodie.

Music to Your Mouth is now in it’s seventh year of laser-focusing attention on all things delicious and Southern set against the wild, beguiling beauty of Bluffton’s May River and environs. And being the good neighbors they are, MTYM dedicates a portion of ticket sales to local non-profit Second Helpings, who distributes food destined for landfill to the disadvantaged in Beaufort, Jasper and Hampton Counties in South Carolina.

During the week leading up to the crescendo of the Culinary Festival (and afterwards too) there are food-centric events like a “foraging cruise” nearby Daufuskie Island, a cooking class with James Beard award-winner Chris Hastings and a floating cocktail party aboard the resort’s circa 1913 yacht, dubbed the “Stink & Drink”. I love that name!  Add in the annual Potlikker Block Party and the Kiss the Pig Oyster Roast and you’ll find that the “best sips, swills, sweets and savories in the south” and the most “talented local and regional chefs and artisans” are to be found at MTYM.

The bacon “forest” complete with sweet and savory porkalicious offerings.

Not only that, but this year there was even a “bacon forest” – I am not joking people! The Culinary Festival also included a veritable king’s cellar of fine wines and spirits for the sampling and cooking demonstrations by the likes of celebrity chefs Kevin Gillespie, Mike Lata, Sean Brock, Hugh Acheson and Ashley Christensen. Southern Foodways Alliance director and all-around Southern food enthusiast, John T. Edge, hosted all proceedings for the day.

Even with all the regional chef-celebrité under the tent it was exciting to see local favorites Orchid Paulmeier (One Hot Mama’s), Ted Huffman (Bluffton BBQ) and Matt Jording (Sage Room) bring on the creativity. Ted’s creamy, smoky pork barbeque with traditional crunchy slaw started my culinary tour off right! Orchid kicked it up with her “Lowcountry sushi” and Chef Jording’s duck with microgreens and crisp sesame noodles was perfection on a plate.

Chef Chris Hastings and his wife, Idie, hard at work under the big tent. In the two years I lived in Birmingham I could not make it to his restaurant, Hot & Hot Fish Club (dang it!), but I do have his cookbook, which is excellent by the way!

Other favorites were Chris Hastings lamb with quinoa and Craig Diehl’s paté wrapped in pastry. I am not exaggerating when I state that everything I tasted was over-the-top fantastic. However, I will go out on a limb or rather a palm frond, and pin my top taste “award” of the day on Chef Sean Brock (Husk & McGrady’s restaurants in Charleston, SC) and his ‘apple salad’.

At first glance this plate deceivingly presents a few crisp apple slices with what appears to be black sawdust on top. Huh? Just dig in with a fork… and surprise! There’s local lump crabmeat nestled underneath the black butter (not saw dust!) and thin apple slices, lightly drizzled with delicious hazelnut oil and circled with a trace of bright green tarragon puree. Managing to get a bit of it all in one bite, it was in two words: extraordinary and sublime, all at once. Chef Brock, you did it, again. If my mouth could swoon then it just did… and I’ll be trying to figure out how to make black butter for the next month.

Once again the Music to Your Mouth Culinary Festival delivered the goods – in every way possible, I may add. If you’ve never been, its a unique and wonderful foodie experience like no other, and if you have, then lucky you! Either way, may the foodie Gods (and the fine folks at Palmetto Bluff) hold another fabulous MTYM in 2013. Count me all in! 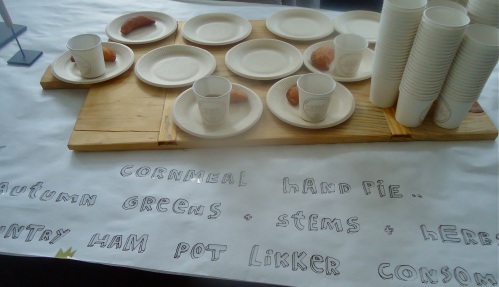 Bacchanalia (Atlanta) served a yummy hand pie with hot pot likker consomme – great on a cold day as it were. Some more table “art” too. Chef Anne Quatrano participated on the chef’s demonstration stage and was quite the card. It’s refreshing to know these “celebrity” chefs don’t take themselves or their “art” too seriously!

Jeremiah Bacon’s clam filled ravioli with pine nuts and kale. His restaurant, The McIntosh, is located down the road in Charleston, SC.

The Sage Room (Hilton Head Island) and chef Matt Jording hit all the perfect notes with his duck dish – served with micro-greens and sesame ‘crispies’.

All that great food and libations were accompanied by river front scenery and some live music fitting for the day. The columns you see are the remements of tabby ruins and some brick work from the original home on the property. 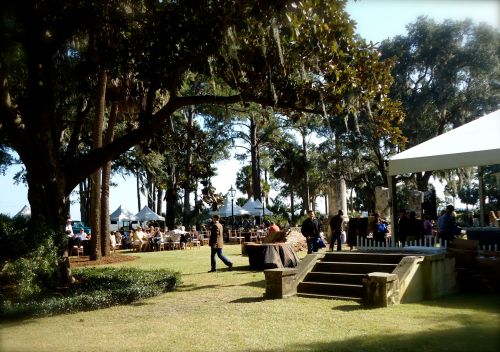 The big tent at the Culinary Festival is perched adjacent to the May River and the Inn at Palmetto Bluff. Don’t be put off by the Orvis and Burberry clad “Garden & Gun” set. At this event you’ll find a veritable foodie paradise where you can actually meet some of the best chefs in the South. Ask questions too… they love that!

2 thoughts on “Ramblings: “All In” at Palmetto Bluff’s Music to Your Mouth.”

My Most Recent Posts